Krav Maga basics that everyone should know. Krav Maga Worldwide self-defense training is the best way to build real self-defense skills that will help you stay safe. Krav Maga is designed to bring people to a hight level of proficiency in self-defense and hand to hand combat in a short period of time. It’s designed this way because it had to be. Krav Maga originated in Israel. When WWII ended and Israel was forming as a nation, people from all over the world were immigrating to Israel and becoming Israeli citizens. Israel had no military to defend against the enemies surrounding it. The leaders of the new country were forced to recruit immigrant citizens in order to build a military force.

The big problem was that the majority of new citizens had no military background whatsoever. However there was a small group of men who been part of the Nazi resistance movement during WWII and had significant military and fighting experience. One of these men was Imi Lichtenfeld. Imi had grown up as a competitive boxer and grappler in the country of Brataslavia. When WWII started, Imi was a young man, he joined the Nazi resistance movement in Europe and quickly established himself as a leader and outstanding fighter. The new Israeli government asked Imi to train it’s newly forming military force. Imi knew that in order to train a group of people to become fighters in as short a time as possible, he had to create a system that was easy to learn and easy to recall under stress. The system he created was Krav Maga. 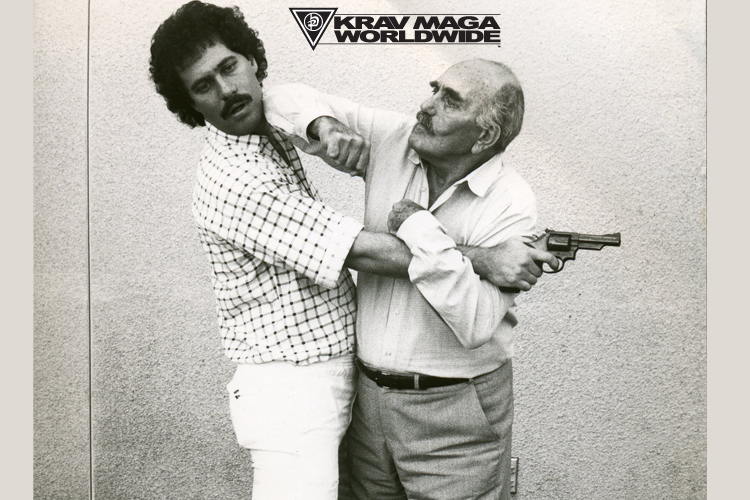 The first thing students learn in Krav Maga Worldwide self-defense classes is a fighting stance. In a very real way it’s a super simple thing to focus on and it might seem almost boring to some people. However being in a good fighting stance, and knowing how to move in a good fighting stance (aka having good footwork) are the the foundation of everything in a fight. If you want to learn to fight, students have to know how to stand and move in a way that will give them an opportunity to do damage to an opponent or attacker who would do damage to them.

In order to get into a functional, effective, fighting stance, stand in relaxed with your feet about hips width apart and your hands at your side. From this position take one step FORWARD with your non-dominant side foot and bring the heel of your back foot (your dominant side foot) off fo the ground so you are on the ball of that foot. It’s important to think about stepping forward and into this position because doing the opposite, stepping backward into your stance, changes the alignment and weight distribution and puts most of your weight in that back heel as opposed to the ball of the foot. From here, take about one half of a step laterally to widen your stance so that your feet are now slightly wider than the width of your hips with ALL TEN TOES POINTING FORWARD. We don’t to have the toes pointing left or right as that will cause the body to blade, or turn sideways. Doing this means that your legs are pointed away from an opponent who is in front of you. This limits how effective you can be with your kicks and also puts you at a disadvantageous angle in relation to your opponent. With your feet a little wider than the width of your hips, the heel of the back foot off of the ground, and all ten toes pointing forward, bend your knees slightly so that you can be a little “bouncy” in your stance. We don’t want straight, stiff, legs. We want soft knees that are ready for explosive movement.

To find the correct position for your hands, reach your arms straight up overhead so that your biceps are close to your ears. Keep your elbows underneath your wrists, keep your hands open and relaxed, and lower your elbows until your finger tips are about the same level as your eyebrows. This will put your hands pretty much directly in front of your face, where they need to be in order to defend against strikes coming toward you, and to counterattack effectively. Make sure your elbows aren’t out too much wider than your wrists and make sure there is some space between the backs of your hands and your face. From here, tuck your chin down slightly so that the soft parts of your face (eye sockets, nose, mouth) are low and protected behind your hands and your forehead is angled forward slightly. In this position it’s more likely that if a strike comes toward your face, it will hit you in the forehead where you have a big, dense, portion of your skull instead of in the soft parts of your face. Krav Maga Worldwide self-defense classes and fight training use this sort of “square” stance because, as mentioned before, it puts students in the best position to strike at and defend against an opponent or attacker who is in front of us. If your body is in the best possible position to defend and counterattack you are giving yourself the best chance to be successful in a fight for your life. Check out the videos below to how Krav Maga Worldwide self-defense classes train students to throw straight punches and front kicks to the groin. For more tips and techniques, check out our Youtube channel by clicking here. 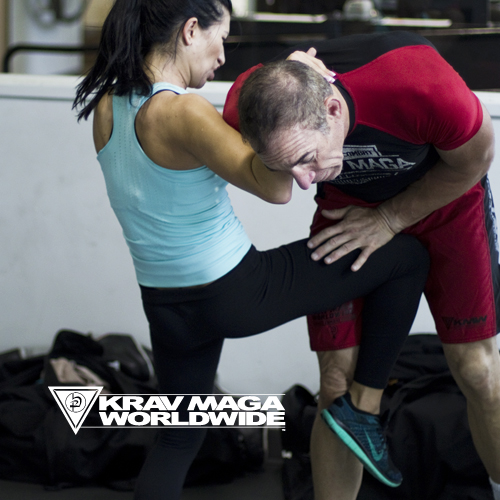 Krav Maga self-defense classes will teach you how to fight. However they will not prepare you for any sort of sanctioned sport fight or martial arts competition. Krav Maga teaches students to do whatever is necessary to get home safe. Realistically, if there’s a way out of a particular situation that presents an opportunity NOT to fight, take it. There’s a saying in Krav Maga training that goes, “The best fight is one you don’t have to be in.” That’s true. Sometimes doing whatever is necessary means AVOIDING trouble or deescalating a situation. If you think about it, gauging someone in the eyes not only hurts but it takes away their ability to see. If you kick someone in the groin, it’s more than likely that they are going to fold or drop involuntarily and not be able to move or fight as effectively. If you punch someone in the throat or in the nose, their breathing is going to be affected. These sorts of strikes are illegal in sport fight competitions because of the way they impede the function of the body. It’s simply not a “fair” way to fight. Sport fighting and competitions have to abide by rules. In a street fight or an assault, there are no rules. It’s this sort of training and mentality that separates Krav Maga training and the Krav Maga Worldwide self-defense system from other, sport or competition related martial arts. There’s a saying in Krav Maga Worldwide classes, “Target anything they use for breathing or breeding.”

Now, of course, trained sport fighters or competitive fighting athletes can fight unfairly or dirty however they aren’t training to fight this way all of the time. In Krav Maga classes and in Krav Maga self-defense training, the focus is survival, the application is whatever it takes and consistent training in this way leads to increased situational awareness and an overall heightened level of safety.

These Krav Maga basics can help anyone establish a very minimal baseline for self-defense. If you can be in the right position, if you are effective in throwing basic strikes, and you have the right mentality, you have a better chance to fight back, win, and go home safe. Every Krav Maga Worldwide certified training center is dedicated to this sort of training. Krav Maga Worldwide certified instructors dedicate their lives to empowering people with real skills to be safer and stronger. If you want to start self-defense training and are looking for “krav maga near me” check out our searchable map of certified training centers or call us at 800-572-8624 and we’ll help you get started.