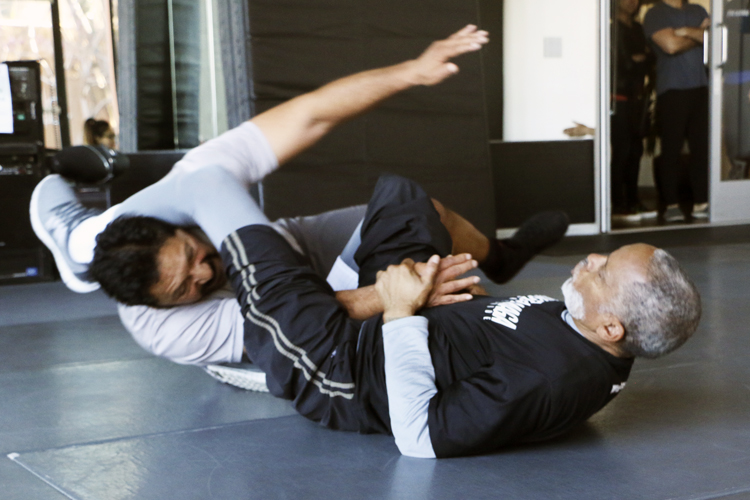 Krav Maga training is the best self-defense system for any person regardless of their demographic. Krav Maga is a self-defense system that was developed in Israel at the end of the WWII when Israel was first becoming a nation and needed to train regular people, with no hand-to-hand combat experience, to become proficient in hand-to-hand combat to serve in what would eventually become the Israel Defense Forces. The system was developed by a man named Imi Lichtenfeld, who had grown up in Bratislava participating in combat sports and became a Nazi resistance fighter during WWII. When Imi immigrated to Israel after the war his experience and knowledge of hand-to-hand combat became the foundation of Krav Maga training. Imi’s vision for Krav Maga training was that it be shared, through Krav Maga Worldwide, all around the world so that ever person could be stronger, safer, and “walk in peace”.

Krav Maga training is the perfect system for senior citizens. Krav Maga by design is easy to learn, easy to remember, and practitioners don’t have to be physically dominant in order to be successful in utilizing Krav Maga. Senior citizens who might not have the physical abilities they once had are exactly the type of person whom Imi envisioned benefiting from Krav Maga training. There are many benefits to Krav Maga training for every person and for seniors some of the major benefits are enhanced personal safety, an overall improvement in health and fitness, increased confidence and energy, and engagement with an incredibly strong community.

At it’s heart, Krav Maga Worldwide® self-defense, and Krav Maga training are about empowering every person with real skills to be safe and strong, so they may walk in peace. What Krav Maga training gives people is the ability to fight back and win if they are assaulted. It’s a somewhat sad reality that criminals who perpetrate assaults and other crimes look for easy targets. A criminal doesn’t want to target someone who is going to put up a fight, give a lot of resistance, or possibly foil their plans by calling attention to what’s going on or slowing a possible escape. Senior citizens are often targeted by criminals as a result of this way of thinking. Krav Maga training teaches people the physical skills to fight back and win if they are assaulted. In most cases when Krav Maga training refers to a “win” it means that the defender is able to get away from the encounter safely. This is important for senior citizens because self-defense in this case isn’t about a long, drawn out, fight or a dramatic knock out finish. A senior citizen who may be at a physical disadvantage against an attacker doesn’t need to overpower them. What’s important is for the defender to be able to fight back to the point that they can get away…or even get help from the police or other people.

Krav Maga training at Krav Maga Worldwide® builds these skills. Students learn to use punches, kicks, knees, elbows, eye gouges, throat strikes, and more to fight back against an assault and do damage to someone who wants to hurt them. Senior citizens are very capable of learning and utilizing these techniques if needed. If a student, of any demographic, is dealing with a specific physical limitation (ie the result of injury or other factor) that prevents them from doing certain movements or techniques involved in Krav Maga training, the training can be modified for them. Krav Maga Worldwide instructors are experts at helping people with this sort of modification. This is important for senior citizens because any physical limitation that is the result of an old injury, or just accumulated wear and tear on the body, can be worked around in such a way that the student can still develop the skills they need to defend themselves. Krav Maga training at Krav Maga Worldwide also deals with specific self-defense scenarios and how to fight back against specific attacks. The system is based on principles that apply to many different attacks and scenarios so it becomes easy to remember across a broad spectrum as training continues. The same principles used to defend against a choke are used to defend against a bear hug, etc. The physical movements and techniques will be different but the principles of the defense are the same. Senior citizens can learn, apply, and be effective with this system as well as people in any other demographic and, really, that’s what Imi Lichtenfeld wanted and designed the system for. For everyone.

Students who are involved krav maga training also learn to develop a sense of “situational awareness”. If a student understands what goes into defending against a certain kind of attack they begin to understand what it takes to avoid that kind of attack or even the sort of situation that might lend to a higher probability of an attack. Senior citizens can, and do, benefit greatly from this. Senior citizens, as mentioned before, are at a higher risk of being targeted for a crime so constantly being aware of their surroundings and potential dangers in those surroundings can help mitigate circumstances that would make an assault possible. Any person who is alert, aware, and actively avoiding situations that put them in danger is going to be a harder target and, ultimately, safer. Senior citizens involved in Krav Maga training know how to avoid dangerous situations but, if a dangerous situation arises, they also know how to fight back, win, and go home safe. Krav Maga self-defense training at Krav Maga Worldwide certified training centers is a workout, there’s no question. Krav Maga training is effective at building cardiovascular endurance, building muscle and lean mass, burning fat, increasing the metabolism, and improving flexibility. These are all components of overall health and fitness that senior citizens in particular need to be consistent at working in order to maintain a high quality of life. Training to move effectively in a fight, to punch, to kick, to defend against specific attacks is a total body effort. This pushes the body to work against all sorts of varied resistance, which in turns benefits cardiovascular health, burns fat, and builds muscle. This sort of activity in Krav Maga training is perfect for senior citizens and their overall, long-term, health. Each Krav Maga Worldwide class in our Self-Defense program, Fitness program, and Fight program, also involves a warm up that gradually brings the body to a level of readiness to do higher intensity work. This always involves some sort of stretching and flexibility work as it relates to what sort of activity and techniques will be performed in the class. This is another huge benefit for senior citizens. Many Krav Maga Worldwide certified training centers, in addition to Krav Maga training, offer a yoga program or Mobility program to help the body recover and, again, improve flexibility. Mobility and flexibility issues are some of the main issues that senior citizens deal with. Even everyday things like standing up, sitting down, or getting out of bed can be affected by poor flexibility. Senior citizens who train at Krav Maga Worldwide certified training centers can actively work to improve their level of mobility and flexibility in every class that is offered. Regardless of a person’s age, they want to be safe, to feel good about themselves, how they look, and what they are able to accomplish. Krav Maga training gives people real skills to be stronger and safer and this builds confidence in all of our students. Senior citizens who are involved in Krav Maga training know that they have the physical skills to defend themselves if they are assaulted. They also have a sense of situational awareness that helps keep them away from trouble. This lends to an increased sense of confidence overall, which helps them to lead healthier, happier, lives. Krav Maga Worldwide self-defense has a belt system and level system through which all students progress. It’s a great feeling to earn a new belt and to move on to the next level of training. The Krav Maga belt-system is a great way for senior citizens to establish, work toward, and achieve goals for themselves. This progression also builds confidence and helps to keep all students, not just senior citizens, motivated to work for continued improvement.

Overall, a senior citizen who is training at Krav Maga Worldwide experiences the same boost of confidence as any other student. It’s important for all students to achieve and to maintain motivation. Sadly, some people in general become less motivated to be active as they get older. For senior citizens involved in Krav Maga training however there is motivation to continue to be healthy, safe, and strong by training, learning, and reaching new achievements in our belt system.